The Bible is not an easy book! It was never meant to be easy, because easy things are rarely worth much. Jesus himself said something very confusing:

“To you has been given the secret of the kingdom of God, but for those outside everything is in parables; so that they may indeed see but not perceive, and may indeed hear but not understand; lest they should turn again, and be forgiven.” (Mark 4:11-12)

Today he tells us to pick up our cross and follow him. It sounds serious. It is. But perhaps not in the morbid way that monks and other morbid Christians have interpreted it. It’s not about being masochists, punishing our bodies and our senses, denying all pleasures and conveniences.

It is about following Christ, not just believing with our lips. It’s not about wearing the cross as a fashion statement; it’s about accepting the Cross and what it says about Jesus Christ. Peter had trouble accepting the idea of a cross and Jesus on it. And when Peter protested, Jesus answered him in a very harsh way (Mark 8:31-33): “Get behind me, Satan! You are not on the side of God, but of men.” Those are strong words, and it is right after he said this to Peter that he spoke the words about picking up my cross and following him. So when Jesus says deny yourself and take up your cross, he’s speaking against Peter and all who treat Christianity as a walk in the park.

Jews demand signs and Greeks seek wisdom, but we preach Christ crucified, a stumbling block to Jews and folly to Gentiles, but to those who are called, both Jews and Greeks, Christ the power of God and the wisdom of God. For the foolishness of God is wiser than men, and the weakness of God is stronger than men. (1 Corinthians 1:22-25)

The Cross is an invitation to deny easy human answers, and Paul describes what it means to follow Christ in Philippians chapter 4. There is nothing morbid or self-punishing about it:

Rejoice in the Lord always; again I will say, Rejoice. Have no anxiety about anything, but in everything by prayer and supplication with thanksgiving let your requests be made known to God. And the peace of God, which passes all understanding, will keep your hearts and your minds in Christ Jesus.

That is part and parcel of taking up your cross. Don’t think morbid; think joy, freedom, peace, excellence, justice, honor. And that’s how I understand Paul’s statement today: “I have been crucified with Christ; it is no longer I who live, but Christ who lives in me; and the life I now live in the flesh I live by faith in the Son of God, who loved me and gave himself for me.” 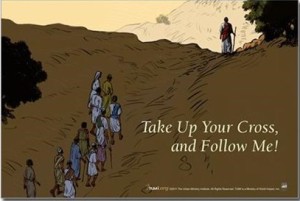 Of course Paul wasn’t always this positive and this open-minded in his letters. He was often harsh, and the Bible is often harsh. The Bible can mean anything you want it to mean. The Cross can be turned into an idol, a weapon, a slogan, an imperial symbol of war, a fashion statement… My blogging friend in Scotland began a new series of studies the other day on the psalms, and he immediately addressed the issue of harsh language in the Psalms, language of hatred and prejudice, language of violence and envy. And I love what he wrote: “In other words, they speak my sinful language.” Yes, that’s what I’ve always believed – though I’ve never said it as eloquently and simply as that. I tell people to read the psalms, even the ones that make you uncomfortable. It’s okay, we are complex creatures, and the psalms are a voice for all our emotions and feelings, both good and bad. God is not offended, God has heard it all. And the Cross is the answer to everything you feel, all your doubts and confusion, all your failures. Don’t let any of that bring you down. 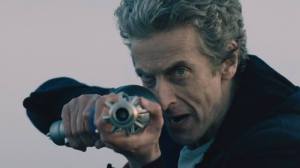 Last night’s season opener of Doctor Who presented an amazing picture of the character known as the Doctor. Everything he thought he knew about himself and about his enemies, was called into question. His understanding was stretched to the breaking point. Will he pick up his cross in next week’s episode? What will save him from the situation he is in? The Bible stretches my understanding to the breaking point, some times I totally reject what the Bible is saying. Sometimes I find it a terrible book. But then I try to remember, only the Cross can give me the answer. And that means surrendering to the wisdom of God.

One Reply to “No morbid Christians here!”