Our Gospel reading today (Matthew 22:2-14)  is a very troubling parable – violent, condemning, exclusionary at the same time that it is inclusive. I usually focus on the inclusive aspects, but not today. In light of what’s going on in the world – the violence, the exclusion, the hatred and terrorism – it’s incumbent that I take this parable head on, in its full force, not only the part that suit my preferences.

Note first of all the language in the original Greek: ὡμοιώθη ἡ βασιλεία τῶν οὐρανῶν ἀνθρώπῳ βασιλεῖ = The kingdom of heaven may be compared to a king… but the English translation is missing a word: the word human, highlighted in red in the Greek! None of the most used translations bother with that word – only two less commonly used translations, Lexham English Bible and Young’s Literal Translation bother taking account of it. It’s not a minor, insignificant omission. A contrast is implied between heavenly king and earthly king. It’s easy to miss this contrast if you don’t translate that word, and that’s not a minor problem.

Continuing with the Greek text: ὅστις ἐποίησεν γάμους τῷ υἱῷ αὐτοῦ. καὶ ἀπέστειλεν τοὺς δούλους αὐτοῦ καλέσαι τοὺς κεκλημένους εἰς τοὺς γάμους. The word for wedding is not in the singular, γάμος, but in the plural, γάμους! There’s good reason for this, and easy to miss if the translation does not take into account the plural. (Young’s Literal Translation does.) The Jewish custom of marriage involved seven days of celebration! So what we translate as “wedding banquet” was not just a dinner but a wedding celebration that included the marriage ceremonies and several days of celebration! I believe that’s the reason why the plural γάμους is used. Perhaps now the refusal of the guests to attend might be a little more understandable?

But some of the guests did not just refuse to attend, but killed the messengers of the king! And the king sent troops to destroy them and their city. Overreaction all around, wouldn’t you say? Not something that happens when guests refuse to show up. This is an extreme parable, meant to make us uncomfortable.

We don’t like to be made uncomfortable. The media shielded most of us from the more “disturbing” photos of 3-year-old Aylan’s dead body this past week. We are very sensitive creatures, after all. But Jesus had no problem making people uncomfortable. Right before today’s parable, at the end of last week’s parable reading, Matthew tells us that the priests and pharisees understood that Jesus was speaking about them. Jesus was speaking to them with every intention of disturbing them.

Jesus is mixing metaphors here. The violence is in the realm of the human king. The open invitation is the act of the heavenly king. The violence is extreme and unjustified – but violence in general is unjustified, in ancient or modern times! Is there really any acceptable excuse for what we see happening in Middle East or in any neighborhood in America? Can violence ever be justified? Especially violence committed in the name of religion?

This entire section of Matthew (ch. 21-23) is controversial to the nth degree. Jesus entered Jerusalem and went straight to the Temple, where he violently drove out the sellers and money changers. A huge blow at the heart of the marriage between money and religion – a marriage that persists to this day. He then gets into a series of confrontational exchanges and parables. Jesus was at war with the habits of the powerful – he still is – so he uses images of power to get their attention. But just as he did not enter Jerusalem as one of the powerful, so in today’s parable he throws a switch that the powerful can’t relate to.

But regardless of what Jesus says, the religious and the powerful still believe they are the 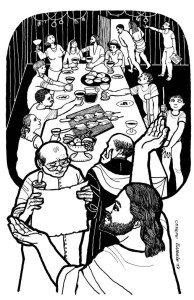 This parable has been interpreted as aimed at Israel and Jewish religion. Certainly it was aimed at the leaders of the Jewish nation, but we are misusing it if we limit its meaning to ancient Israel and the Jews. It is for all times and all places. Every religion, every nation, every individual stands under the same judgment.

I personally do not like this parable the way it’s written. Whether Jesus himself spoke it exactly as Matthew reports it or whether Matthew did a major edit and rewrite we cannot know. Matthew clearly wants it to be taken as an attack on the Judaism of that time. We can see its broader significance.

I take two messages from this reading: