A few years ago two important books were published: Debt, the First 5,000 Years, by David Graeber (2011, revised 2014); and Le Capital au XXI siècle (2013) by the French economist Thomas Piketty, quickly translated into English as Capital in the Twenty-First Century (2014) and many other languages. Piketty’s book became an immediate sensation and bestseller and is probably the most important and most-discussed book of the 21st century, so far. It’s a bit too technical for my small brain, so I prefer Graeber’s book, which you can buy locally at Bullmoose or online at Amazon or any of its international branches.

I was reading a chapter of Graeber’s book this morning and came across an amazing anecdote (pages 92-93), an incident in the life of the British missionary, Rev. W.H. Beatley in the Congo (19th or early 20th century?):

A day or two after we reached Vana we found one of the natives very ill with pneumonia. Comber treated him and kept him alive on strong fowl-soup; a great deal of careful nursing and attention was visited on him, for his house was beside the camp. When we were ready to go on our way again, the man was well. To our astonishment he came and asked us for a present, and was as astonished and disgusted as he had made us to be, when we declined giving it. We suggested that it was his place to bring us a present and to show some gratitude. He said to us, “Well indeed! You white men have no shame!”

The story stopped me in my tracks and I didn’t continue reading. It is a story that could very well have been a parable by Jesus. This is the kind of story that Jesus loved to tell – a story that turns the tables on all our expectations. Jesus was good at it, but reality is often stranger than fiction, and even Jesus rarely told a story so surprising as this one.

This story strikes at the very heart of our thinking. We expect to be thanked! We expect people to feel indebted to us when we do something good for them. It’s part of our contemporary language: “You owe me.” We’ve all used that phrase at one time or another, or at least thought it. I know I have said it and thought it!

What the missionary failed to understand is what we also fail to understand: It is the most blessed thing to help someone. When I do good – even when I do it grudgingly – I feel blessed, I feel better about myself and my purpose for living in this world. Saint John Chrysostom (lived 347-409) used to preach to his congregations in ancient Antioch and Constantinople that the poor man begging at the entrance of the church is a superior altar table than the one inside the church where the priest stands and offers the eucharistia!

“The temple of our afflicted neighbor’s body is more holy than the altar on which you celebrate the holy offering. You are able to contemplate this altar everywhere, in the street and in the open squares.” 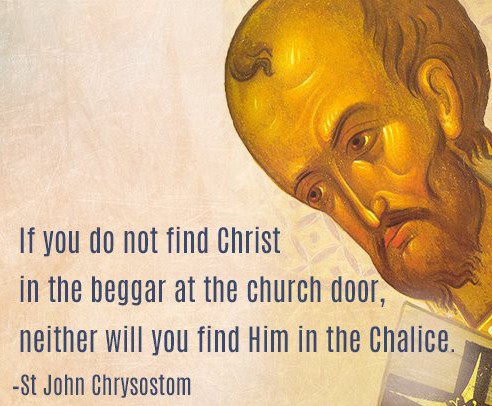 Imagine a priest today saying something like that in any of our churches. He would be reported to a bishop and told to never say something like that again. Of course I’m safe from such discipline here because I’m quoting a saint of the church. It seems that the only way you can challenge common perceptions in the church is to quote a rebel saint from the past, and Chrysostom was in many ways a rebel saint. He focused on precisely those same things that Pope Francis is most concerned about – poverty and the misuse of money – and we know how Francis has been attacked in certain quarters.

But do you see what Chrysostom was trying to say? The very thing the missionary could not understand. When you help someone needy, you should thank that person rather than wait for that person to thank you!

Here’s how Chrysostom put it in one of his sermons:

Helping a person in need is good in itself. But the degree of goodness is hugely affected by the attitude with which it is done. If you show resentment because you are helping the person out of a reluctant sense of duty, then the person may recieve your help but may feel awkward and embarrassed. This is because he will feel beholden to you. If,on the other hand, you help the person in a spirit of joy, then the help will be received joyfully. The person will feel neither demeaned nor humiliated by your help, but rather will feel glad to have caused you pleasure by receiving your help. And joy is the appropriate attitude with which to help others because acts of generosity are a source of blessing to the giver as well as the receiver.

Both the giver and the receiver are blessed. In his rather shocking way, the man in the story was trying to teach the missionary something that is easily missed by most Christians. By reaching out to another person you are offering greater worship than anything you can offer inside a church! Again, not my opinion but that of Saint John Chrysostom, whose Liturgy we do on Sundays.

The man in the story and Chrysostom did what Jesus loved to do: turn people’s thinking upside down. The last shall be first, Jesus loved to say. That goes against everything we usually think. We follow every story about celebrities, big-time successful people, and politicians. But they are not necessarily the ones God has his eyes on. No, it’s more likely the man who shocked the missionary rather than the missionary!

Here are some words of Saint John Chrysostom to help you turn your own thinking upside down!

If you cannot find Christ in the beggar at the church door, you will not find Him in the chalice.

Lift up and stretch out your hands, not to heaven but to the poor; for if you stretch out your hands to the poor, you have reached the summit of heaven. But if you lift up your hands in prayer without sharing with the poor, it is worth nothing … Every family should have a room where Christ is welcomed in the person of the hungry and thirsty stranger. The poor are a greater temple than the sanctuary; the poor are an altar that you can raise up anywhere, on any street, and offer the liturgy at any hour.

Do not, therefore, adorn the church and ignore your afflicted brother, for he is the most precious temple of all.

Would you honor the body of Christ? Do not despise his nakedness; do not honor him here in church clothed in silk vestments and then pass him by unclothed and frozen outside. He who said, “This is my body,” and made it so by his word, is the same that said, “You saw me hungry and you gave me no food. As you did it not to the least of these, you did it not to me.” Honor him then by sharing your property with the poor.. For what God needs is not golden chalices but golden souls.

I am not saying you should not give golden altar vessels and so on, but I am insisting that nothing can take the place of almsgiving. The Lord will not refuse to accept the first kind of gift but he prefers the second, and quite naturally, because in the first case only the donor benefits, in the second case the poor gets the benefit. The gift of a chalice may be ostentatious; almsgiving is pure benevolence.

What is the use of loading Christ’s table with gold cups while he himself is starving? Feed the hungry and then if you have any money left over, spend it on the altar table. Will you make a cup of gold and without a cup of water? What use is it to adorn the altar with cloth of gold hangings and deny Christ a coat for his back! What would that profit you?

It is no wonder that Chrysostom was attacked by the powerful and was eventually exiled by the Byzantine emperor. That’s right, the emperor who usually stood in the most important place at the Liturgy exiled the man who was trying to bring the emperor’s mind into harmony with Christ’s mind. But Chrysostom was not against money and the rich per se; his attacks were aimed at the misuses and selfish use of money:

Many people today cannot understand the words of Chrysostom. We look up to people of great wealth, and many of us look down on the poor, often blaming them for their own poverty because they are lazy or addicts. Or, they take the easy way out by claiming it’s God’s will for them to be poor. Such thinking is nothing new, it’s an age-old prejudice. Saint Gregory of Nazianzus (c. 329-390) had some words for that thinking:

There are some even among our own people, a thing that makes one weep, who, far from helping or having compassion on these poor sick, will reproach them bitterly, insult them, make up empty, foolish speculations about them; and truly, out of the ground they mutter speeches, and voices are heard in the air; not in the ears that used to and understand holy teachings. And they have the audacity to go further, and to say: ‘their affliction is from God; and our good health comes from God. And who am I to undo the decree of God, and put myself forward as more kind than God? They are sick. Let them be sick! Let them be afflicted! Let them suffer misfortune! This is the will of God!

Saint Gregory is one of the most highly regarded of all saints of the Orthodox Church, and is honored together with Chrysostom and St. Basil every year on January 30th. So highly is he regarded that he has been honored with the name “St. Gregory the Theologian”! Theologian because he plumbed the deepest truths about Christ and the Trinity. But theologian also because he saw Christ beyond theology! He saw Christ in the poor, just as Chrysostom did. That is theology at its purest!

3 Replies to “When our thinking is turned upside down”