The daily lectionary of Lent continues with three readings from the Old Testament: Genesis 3:21-4:7; Isaiah 4:2-5:7; Proverbs 3:34-4:22. For the most part I continue to use the Revised Standard Version as my basic English translation of the Bible. Occasionally I use the New Revised Standard Version when I want more inclusive or contemporary language, but I grow weary of the NRSV’s frequent sacrifice of good English on the altar of political correctness.

The Isaiah reading is interesting for the parable of the vineyard – a parable that became a model for the many similar parables that Jesus told. The language is beautiful, indeed the parable is a “love song”(Isaiah 5:1). The harsh judgment on Jerusalem and its inhabitants comes precisely because God poured so much love on the vineyard! It is a counterpart to the judgment that was passed on the first man and woman.

It is indeed the Genesis reading that must again grab our attention. Our reading begins after God has pronounced punishment on the serpent, the man and the woman (Genesis 3:14-19). The man was first called “Adam” in verse 17. But, of course, the word had already appeared in the narratives, not as a proper name but simply the noun for “man”: אָדָם ( ‘adam ) has been used for humanity collectively (1:27) and for a man individually, specifically a male individual (chapter 2). But note also Genesis 5:1-2, where the noun stands for both male and female, a return to Genesis 1:27. In verse 20 the woman is given the name Eve by Adam, to signify her role as “mother of the living.”

So now, as a couple with proper names, Adam and Eve enter history. God makes garments of skin to clothe them (verse 21) – again, anthropomorphic, mythological language. Why skin? one might ask. There are spiritual interpretations – such as those offered by Origen and Gregory of Nyssa and recent Greek theologians like Nellas, and I’m sure the ancient rabbis had their interpretations as well – but perhaps it’s best to accept that these garments were made from animal skins because animals were close at hand; and certainly these garments offered superior protection than the fig leaves that Adam and Eve used to cover their nakedness (3:7). 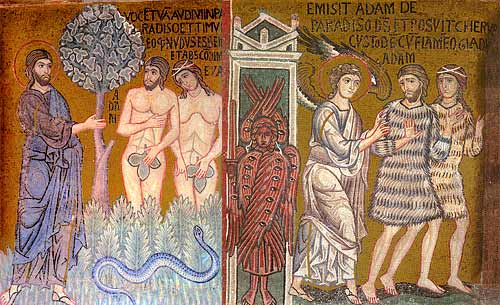 God drives Adam and Eve out of the garden lest they eat from the tree of life and become immortal. God’s self-reflection is fascinating for its utterly mythological construct: “Behold, the man has become like one of us, knowing good and evil; and now, lest he put forth his hand and take also of the tree of life, and eat, and live for ever.” So was the serpent right after all? Was God’s greatest fear that the humans would become “like God, knowing good and evil” (3:5)? And now that they know good and evil, they must be kept from eating from the tree of life – a tree from which they originally were allowed to eat! So is that all there is to being “god”? Knowing good and evil and living for ever? It’s rather mind-numbing, to be quite honest. Is this the same God who will send his son to become human millennia later? Adam and Eve are driven out of Eden and cherubim guard the tree of life with their flaming swords.

Adam and Eve have two sons, Cain and Abel. The story of the two brothers is split between today and tomorrow’s reading, which is unfortunate. But the opening section we read today tells us the most important thing we need to know about these two brothers: their murderous rivalry. And this rivalry between brothers will manifest itself elsewhere in Genesis and in the subsequent history of the twelve brother tribes of Israel.

But what is the cause of this rivalry? Why, what else? Religion, of course! The fellowship of humans with God does not vanish after the exile from Eden, but it becomes something else. No offerings to God were needed in the garden. But now offerings become part of the human response to God. And the first conflict in human history arises from two competing offerings! And it seems that God stoked the fire. God preferred the offerings of Abel to those of Cain. And is that really God speaking in verses 6-7, or just a psychotic projection of Cain’s own conflicting affects? The Lord said to Cain, “Why are you angry, and why has your countenance fallen? If you do well, will you not be accepted? And if you do not do well, sin is couching at the door; its desire is for you, but you must master it.” Easy for God to say, after he has shown favoritism!

Well, there you have it, religious conflict at the very origins of human existence. Is it any wonder that religious conflict is still the number one cause of human suffering? My long-distance friend and fellow blogger, Mike Mair, in his blog dealing with the story of Cain and Abel included a humorous anecdote about Nasruddin, a favorite character for preachers and one whose exploits I have sometimes used in my sermons and writings. Here is the Nasruddin story Mike used to illustrate the Cain and Abel story:

There is a wicked story about the mad mullah of Arab legend, Nasruddin. One day two boys approached the mullah and told him they had found twelve glass marbles in the street and were wonderng how to divide them fairly between them.

“How do you want me to divide them?” Nasruddin asked, “According to my justice or to Allah’s”

“According to Allah’s of course,” they answered.

So Nasruddin gave 11 to one boy and 1 to the other.

Doesn’t this sound like Yahweh as well? Doesn’t God show favoritism in the Cain and Abel episode? Did God set up Cain to murder Abel? Or was the voice that Cain heard simply the projection of his own fears? Could it be that religion is nothing else than the projection of man’s own fears and convoluted moral codes? I prefer not to reach such a conclusion – though certainly “religion” is a word loaded with both positive and negative connotations. So I’m going to continue reflecting on Genesis during this Lenten season, hoping that Isaiah will shed some occasional light as well. Proverbs is not crucial, but I’m ready to receive any “wisdom” that book might provide. The God question continues to be the central question for many people, myself included. And the events of Genesis chapters 3 & 4 certainly are problematic.