At the heart of our Liturgy is Mercy. We say it so often that there’s a Greek saying that makes fun of it. But make no mistake, Mercy is at the heart of our faith. And mercy is precisely what is missing in the world today. Everything comes from mercy. And the parable Jesus teaches today touches at the core of what we call religion and what we call gospel. Religion and gospel are not the same thing.

The great theologian Karl Barth said that religion is man’s rising to  go to God. But the essence of Christianity, what we can call the gospel, is God’s rising to go to man. Brilliant distinction. God rises to come to us because we need forgiveness, we need mercy. For some people that makes Christianity too negative. I still remember the woman we talked to at the harbor in Ydra two summers ago waiting for our boat back to Athens. How she was repelled by the many crucifixes she saw while traveling in Latin America and other Catholic countries. What perhaps she didn’t understand is that she was repelled not by the crucifixes, but by the Cross! The Cross, that “scandal” (σκάνδαλον, Galatians 5:11, translated as “offense” in most English Bibles) that strikes the heart of human thought; that reminder that we need forgiveness, that we need God to come to us – to be born among us, to walk among us, to be ridiculed and rejected by us, and finally to be crucified by us.

Yes, we prefer our own versions of God. No Cross, no forgiveness, no praying for mercy. Those are all a big blow to human ego and self-satisfaction! No, all we need is love. Imagine no religion, sung the same John Lennon. Indeed, imagine no religion, yeah why not? Imagine the gospel instead. But no, we don’t want to imagine gospel. Gospel, evangelion, good news? Why do we need good news? We have fake news! 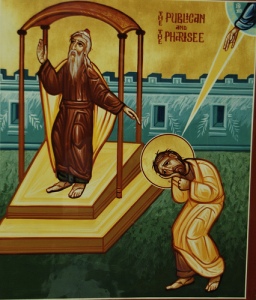 Without mercy and forgiveness what do you have? Look at the Pharisee in today’s parable. He had no need of mercy. He was self-sufficient. He had all his religious requirements down pat. All he looked to receive from God was congratulations for being such a good religious man. But was he? His heart was full of hatred and contempt for the publican. He did not thank God for mercy, because he had no need of mercy. I thank you, God, that I am not like other men. You see, without mercy and forgiveness, you can pretty much hate anyone. Especially someone like the publican, who stands in the back and beats his breast asking for God’s mercy. Look how terrible that man is acting. Why is he so negative about himself, dragging himself like that? He must be a terrible sinner. Thank God I’m not like him.

One of the great ascetics of the Orthodox Church, Saint Dorotheos of Gaza (6th century) wrote this beautiful bit of advice:

Elias Chacour was priest of a small village in northern Israel before being made Archbishop of Haifa. When he first arrived at the village church in 1965 he found a church both physically and spiritually in total disrepair. When the people assembled in church he could see the deep divisions that existed among them. Four distinct groups, each keeping distance from the others. “The empty space between the four groups made the sign of the Cross” he said. On Palm Sunday of his first year at their priest, Father Elias looked at the grim faces in church. After the Gospel reading, when it was time for the sermon, he walked to the back of the church and padlocked the door. Returning to the front he told his parishioners:

Sitting in this building does not make you a Christian. You are a people divided. You argue and hate each other. You gossip and spread lies. Your religion is a lie. If you can’t love your brother or sister whom you see, how can you say that you love God whom you don’t see? You have allowed the Body of Christ to be disgraced. I have tried for months to unite you. I have failed. I am only a man. But there is someone else who can bring you together in true unity. His name is Jesus Christ. He has the power to forgive you. So now I will be quiet and allow him to give you that power. If you will not forgive, then we stay locked in here. If you want, you can kill each other. In that case I’ll provide your funerals gratis.

A long silence followed. Finally one man stood up, faced the congregation, bowed his head and said, “I am sorry. I am the worst of all. More than any of you, I need forgiveness.” Father Elias embraced him, and the church immediately became a chaos of embracing and forgiveness. Father Elias had to shout to be heard. “Dear friends, we are not going to wait until next week to celebrate the Resurrection. Let us begin it now. We were dead to each other. Now we are alive again.” He began to sing the paschal hymn, “Christ is risen from the dead, trampling down death by death, and to those in the tombs bestowing life.” The congregation joined in. Unlocking the door, Father Elias led them into the village streets. The rest of that day, in every home, at every door, there was forgiveness. It was resurrection for the entire village.

It’s a beautiful story from the recent past. Elias Chacour is still alive, retired now. Three times he has been nominated for the Nobel Peace Prize. He describes himself as a “Palestinian-Arab-Christian-Israeli.” It doesn’t get much better than that. In 2001, Chacour gave a commencement address at Emory University, in Atlanta, Georgia, where he accepted an honorary degree. An excerpt from his speech:

You who live in the United States, if you are pro-Israel, on behalf of the Palestinian children I call unto you: give further friendship to Israel. They need your friendship. But stop interpreting that friendship as an automatic antipathy against me, the Palestinian who is paying the bill for what others have done against my beloved Jewish brothers and sisters in the Holocaust and Auschwitz and elsewhere.

And if you have been enlightened enough to take the side of the Palestinians — oh, bless your hearts — take our sides, because for once you will be on the right side, right? But if taking our side would mean to become one-sided against my Jewish brothers and sisters, back up. We do not need such friendship. We need one more common friend. We do not need one more enemy, for God’s sake.

Those are words of mercy, those are the words of someone completely under the power of the gospel. Mercy, dear friends, is at the heart of healing – not only at Mercy Hospital here in Portland, but the healing that only the gospel of Jesus Christ can bring to human relations and how we see each other and ourselves through the eyes of God. Thomas Merton, one of my great heroes, wrote:

If we believe in the Incarnation of the Son of God, there should be no one on earth in whom we are not prepared to see, in mystery, the presence of Christ.

One Reply to “Room for Mercy”