Dorothy Sayers began one of her public talks with the following words:

What I am going to talk about is theology. … I think it only fair to warn you about this, because I so often get letters from people saying that they “don’t agree with theology.” They don’t like it, as some people don’t like spiders. If anybody here feels like that, this is the cue for them to rise and make a graceful exit. (Quoted in Creed Without Chaos, Exploring Theology in the Writings of Dorothy L. Sayers, by Laura K. Simmons, page 11)

She was a popular writer in Great Britain, known primarily for her Lord Peter Wimsey mystery novels. But she was also a very articulate defender of the Christian faith when the Church of England was already beginning to drift from classical Christian teachings. She was part of that unique circle of Christian intellectuals at Oxford University that also included C. S. Lewis, J. R. R. Tolkien, Charles Williams, and others, during the 1930s and 40s. She died in 1957.

My own first awareness of Sayers was in Florence in 1978, when I picked up Dante’s Divine Comedy in the translation by Dorothy L. Sayers. What better place to start reading the Divine Comedy than in Florence, Dante’s hometown? And with Dorothy Sayers as translator?

In the early 1940s Sayers produced a series of radio plays for the BBC titled, The Man Who Would Be King – a series in 12 parts dramatizing the life of Christ. One Jewish man who listened to the radio plays understood Jesus for the first time in his life. His difficulty had been the Incarnation — that is truly the primary Jewish difficulty. After hearing the plays, he felt that so good and great a man must have been God. Before, he hadn’t been able to see how so great and good a God could have become man.

This dear friends is where most of us are. We also have trouble with the Incarnation. How could a great and good God become a human being? It’s a problem for the theologians, most people would say. Yes, if by theology you mean some abstract kind of religious philosophy. That’s not the kind of theology Dorothy Sayers spoke or wrote. It’s not the kind of theology that I embrace. My kind of theology is the theology that embraces and nourishes. That is why my primary gateway to theology is the Liturgy – not just the Sunday Liturgy, but the whole liturgical cycle of the Orthodox Church, especially the great annual feasts, some of which we represent in our icons.

It’s only when we see the actions of Jesus in their whole context – not just the first century, but history before and after, that we can begin to do theology, to speak properly of God. God gives us voice, like he gave voice to the woman with the flow of blood in today’s Gospel reading. And God raises us from our depths of solitude and ignorance like he raised the girl from the dead in today’s reading. Giving voice to the bleeding woman was for her as good as raising her from the dead, from a living death. This is theology: To be touched by God; to be given a voice by God; to be raised to life by God. It’s all there. How we respond is the challenge. 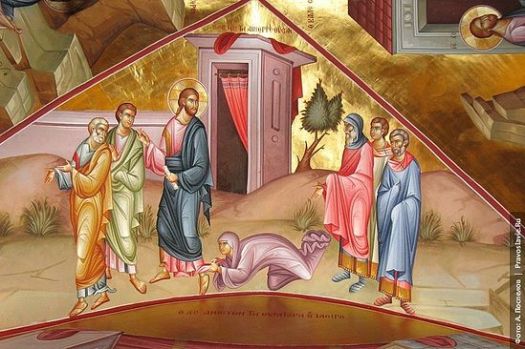 One writer writes about going to a meditation center in Paris. He writes:

Madame de Salzman asked me whether I found the meditation at the Maison last evening useful. She had not been feeling well and could not come herself. Someone else, a senior person in Paris, had led the meditation. I had felt a little disappointed by the fact that she had not come and I had not been able to make a deep connection with myself during the meditation. I made some complaint about the way the meditation had been led. Madame de Salzman asked me something which struck me like a thunderbolt, and showed me the level of my self-occupation. She asked simply, “Did you help?”  (Quoted in Parabola Magazine, Winter 2016-17 issue, page 112)