Last week I speculated why our churches – including our own here in Portland – are slowly emptying. My answer last week was two-fold: Our Orthodox Church has forgotten its purpose to be a place of healing, and people simply don’t think they need healing – or to put it more radically, they don’t need Jesus. Or they think they don’t need Jesus!

Today we have two readings (2 Corinthians 11:31-12:9 and Luke 16:19-31) that remind us of what used to be the reason why people went to church. For many centuries, the church had two weapons that kept people coming: The promise of heaven and the threat of hell. Promises of heaven can motivate many people, but nothing motivates like fear. So the church for many centuries used the weapon of fear to keep people coming back and staying in their places or pews.

Let’s start with Abraham since he is in my opinion the real central character. Notice that Lazarus doesn’t speak, and the rich man only speaks with Abraham; even when he requests a favor from Lazarus, he asks it through Abraham. So Abraham is the central character. What was Abraham to a Jew? Abraham was the father of many nations (Genesis 17:5). He is the father of Jews, Christians and Moslems. In the Bible’s language, Adam was the man of dust, the first man. But no one in the Bible looks to Adam as his/her father. They look to Abraham. The rich man now calls him father Abraham, but while he was alive, he ignored the man at his doorstep who also had Abraham as his father! 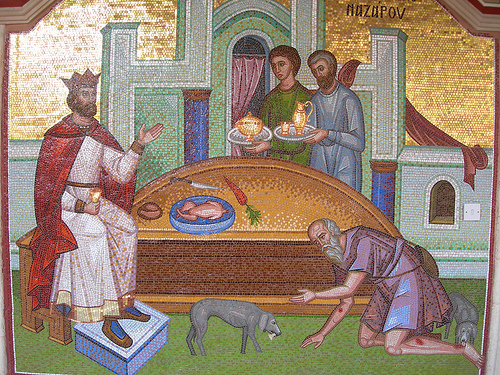 So the poor man Lazarus is carried to the bosom of Abraham in the parable, while the rich man looks on from afar. What else does Abraham represent in the Bible? He represents hospitality. In Genesis 18, Abraham and Sarah welcomed three men to their home in the desert, and without knowing it they offered hospitality to angels. “Do not neglect to show hospitality to strangers, for by doing that some have entertained angels without knowing it.” (Hebrews 13:2 – clearly referring to this incident) In our own tradition, we represent the three men who visited Abraham and Sarah as angels, but angels who also represent God. And that’s because in the Genesis story, Abraham addresses the three men as Lord – Yahweh! So when Jesus tells us, I was hungry and thirsty and you gave me food and drink; I was naked and you clothed me – he was thinking of Abraham’s kindness and hospitality. Abraham is our example of hospitality. The rich man calls Abraham his father, but he did not do what Abraham did.

Finally, in that same chapter 18 of Genesis, the three men who visit Abraham and Sarah are on their way to destroy Sodom and Gomorrah. When Abraham hears of this, he pleads with God and bargains. What if there are 50 righteous people there, will God still destroy? No, God will spare the place for the sake of the 50. What if there are 45? I will not destroy it. How about 40? And so on. Finally, what if there are 10 righteous people there? For the sake of ten I will not destroy it, God says and walks off. And we know the rest of the story. The rich man perhaps remembered the story of how Abraham was even able to bargain with God so he now hopes Abraham can do some bargaining on his behalf.

So Abraham represented three things relevant to the two men in today’s parable and to us: their/our common fatherhood, hospitality, and intercession with God. The rich man failed in all three, and Abraham had nothing with which to help him. Remember, Abraham had pleaded if there were ten righteous people in Sodom and Gomorrah! The rich man in today’s parable was not a righteous man – Abraham could not plead for him.

Finally, the rich man begs for a message to be sent to his brothers. Ah, there’s the fear motivation. Maybe they can be scared to doing things differently so they don’t end up in the same place as he. It doesn’t work that way, Abraham replies. Fear does not work – he could be speaking to today’s people. If the man’s brothers haven’t listened to Moses and the prophets, they won’t believe even if some one should rise from the dead and go to them. And here my message today re-unites with last week’s message. When people think they’re just fine thank you, they don’t need Jesus. And they don’t need the church or the sacraments. And they certainly won’t be scared by any parables such as the one we heard today. So let’s do for them what Abraham would do. Treat them as our brothers & sisters, offer them hospitality in our hearts and whenever they do return, and above all, lets intercede for them. Let’s pray for them. Then we might become the church that draws people back.