What is the least popular book in the Bible? Most people would say, Leviticus! For very good reason, as Leviticus consists mostly of laws that Moses gave to the people of Israel. And many of these laws are the kind of thing that give the Bible a bad name among many modern people. And yet, the central theme of Leviticus is HOLINESS. God is HOLY, and God’s people are called to be holy. God “separated” the Jews from the peoples of the world in the sense that they were set apart to be holy. This was to be the quality that identified them as God’s people. This matter of holiness was not meant for the people of Israel to feel superior to others; it was not a matter of ego inflating! It was a matter of their mission in the world. 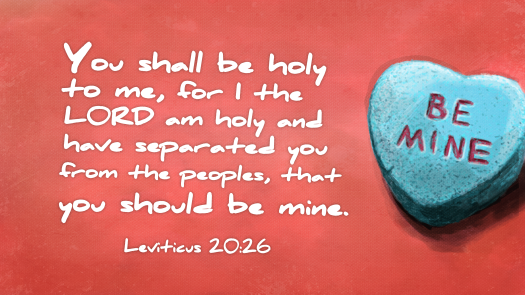 I needed some uplifting inspiration when I logged into my Logos account at midnight to see what today’s verse might be, and I was very happy to see this verse from Leviticus. I had spent the afternoon watching Simon Rattle’s final concert this past June as Chief Conductor of the Berlin Philharmonic. The program was Mahler’s 6th Symphony, an overwhelming 85 minutes of music and an overwhelming performance by the greatest symphony orchestra in the world.  I got into the Mahler mood and continued by listening to couple older recordings of Mahler symphonies. But in the midst of Mahler, I turned to my Apple Music library and came upon John Lennon’s Christmas Song. One verse caught my attention: “And so this is Christmas, for weak and for strong, for rich and the poor ones, the world is so wrong,” But for some reason, I didn’t hear “the world is so wrong.” I heard “the world is so young.” And I thought, wow, what a great line, John! But then I went back to play the song again and I turned on the Lyrics that Apple Music provides and I realized that I had not heard correctly. “The world is so wrong,” were the words John Lennon sang. But I think the song would be better if John had sung what I thought I heard, “the world is so young”! “Young” brings hope, and it seems that’s what I wanted to hear. “Young” brings hope that we can overcome what is wrong with the world and once again rediscover God’s call to be holy. “The world is so young” can be the antidote we need to apocalyptic visions of an aging world and a humanity that has lost its ethical moorings and will to live.

I still have not recovered from the attack on the Tree of Life Synagogue two Sabbaths ago. It continues to haunt me and it has caused me to question so much of who we are. I can’t shake off the conviction that we Christians will be judged by God for how we have treated the Jews through the centuries. Every year I cringe at some of the words we read or chant during Holy Week services. The blatant anti-semitism that the Orthodox Church still promotes in our theology and hymnography is indefensible – especially after the Holocaust. And especially as we see antisemitism again on the rise. Will the Church ever wake up to the poison that medieval words and superstitions perpetuate? All the shows of solidarity with the Jews that our ecclesiastical leaders parade for photo ops will not erase our continuing guilt. When will we say, Enough, we will no longer use such horrible words in our worship?

There is wrong in the world, John Lennon, but the world is not wrong. As long as there is a holy God and people who are called to be holy, we can hope that we will see again that the world is beautiful and longs to be holy together with God’s people. Even Paul said something like this in chapter 8 of Romans. Read the whole chapter, you won’t regret it. Leviticus tells us what is the mission of God’s people in the world: to be holy, to bring to reality a different standard by which we live and by which we view each other and our beautiful world. The Jews through their adherence to those antiquated laws of Leviticus are showing that they have not forgotten their original calling. And they have survived thousands of years of persecution because they are and always will be GOD’S PEOPLE! I wonder when we Christians will realize that our calling and destiny are to unite with them in holiness. Holiness is not limited to monks who supposedly pray for the world; nor is holiness for those who the Church decided should be called “saints.” Holiness is the mission of all God’s people. Two thousand years later we still don’t get it. And that’s why “the world is so wrong.”

2 Replies to “Leviticus to the rescue!”