A Gospel reading of contrasts 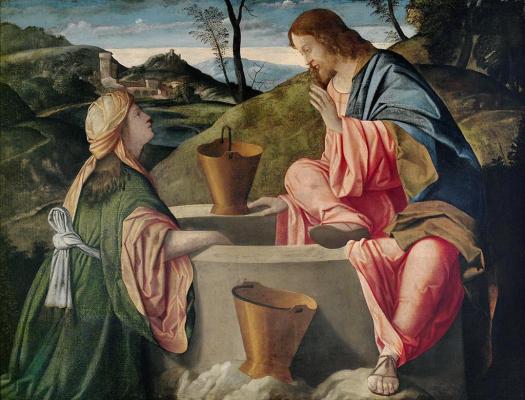 Jesus in John’s Gospel is identified as Creator and life-giver – The Logos: All things came into being through him, and without him not one thing came into being. In him was life and the life was the light of all people. The light shines in the darkness and the darkness did not overcome it (John 1:1-5).

The woman switches the subject to religion. Who is right? We Samaritans or you Jews? Where is the proper place to worship God? Here on our mountain or in Jerusalem? Jesus’ answer is shocking: No place – not yours, not ours. We must worship God in spirit and truth.

The woman is not convinced – this is too advanced for her, too radical, so she finds a way out: “When Messiah comes, he will reveal all things to us.” Which draws a momentous self-revelation from Jesus: I AM, εγώ ειμι. Jesus habitually resisted identifying himself as Messiah – but he does to this Samaritan woman, a woman not of his own religion.

A story in yesterday’s Guardian newspaper told of two native-American teenagers signed up for a tour of Colorado State University. One mother called the police because they looked like “they don’t belong.” She said they were quiet and “creepy” and “really stand out.” “They don’t belong” – that’s what Jews thought of Samaritans, and vice versa. That’s what many Christians today think of people who don’t look like us.

What was that line by Rabbi Sacks last week? God asks us to see His image in one who is not in my image. If we worship God in spirit and truth, we don’t see differences. We see the image of God. We see the life-giver Christ, we see the Logos who gave life to all people.

2 Replies to “Conversation at the Core of Life”