The women came to anoint the body of Jesus. An anonymous woman had already anointed Jesus, but Jesus pronounced that as a symbolic preparation for his burial. Now his burial has taken place and the women go to the tomb to properly anoint the body of Jesus. Joseph of Arimathea had been too much in a hurry to take down the body from the cross before the sabbath started and had no time to do the proper anointing. They don’t know how they will move the stone to enter the tomb, but they go, faithfully.

By the way, let’s deal right here with something you often hear. Atheists and conspiracy 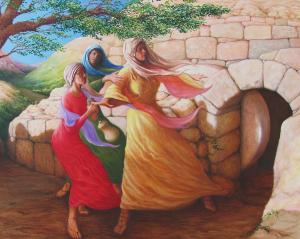 proponents tell us that the resurrection is a myth, that the Gospel writers – those four men up in our ceiling – invented all the stories of the resurrected Jesus. If Mark had invented the story we just read, he would not have had women go to the tomb. In the patriarchal society of Jesus’ time, women’s testimony was worthless and rejected at all levels of society “because of the levity and temerity of their gender,” according to Josephus. Yet Mark has women as the only witnesses to the empty tomb! He would never make that up if he wanted his account to be taken seriously.

They encounter a young man in white robe. The usual interpretation is that this was an angel, and that’s the most likely explanation. But there is another possibility. Mark 14:51-52 tells us that when Jesus was arrested: “A young man, wearing nothing but a linen garment, was following Jesus. When they seized him, he fled naked, leaving his garment behind.” Same Greek words – νεανίσκος περιβεβλημένος – here at the tomb. Could the young man at the tomb be the same young man? Dressed again in white, but now clothed with the radiance of Christ’s resurrection!

I like that possibility. A young man is the one chosen to announce the good news, but a young man who has known Jesus. He is not here, he is risen. But he will meet his disciples in Galilee. Where else, but in the place that was most familiar to them. He is Jesus of Nazareth, after all. This is another tell-tale sign that this was not an angel. An angel would most likely have used a loftier title to refer to Jesus. But Jesus of Nazareth almost takes us right back to the beginning of the Gospel. “In those days Jesus came from Nazareth,” Mark tells us in chapter 1. We’ve come full circle. The kingdom of God’s presence is not in some fantasy land, but right there where Jesus had his greatest joys and greatest troubles, where he was even rejected by his own people in Nazareth!

In Galilee, life will begin again for the disciples. Without Jesus, but armed with his spirit and his resurrection power, they will spread out in all directions to bring the news of what God has done and will do for as long as humans exist on earth.

As you’ve heard me say before, Mark’s Gospel ends in verse 8, with a hanging preposition: εἶχεν γὰρ αὐτὰς τρόμος καὶ ἔκστασις· καὶ οὐδενὶ οὐδὲν εἶπαν, ἐφοβοῦντο γάρ. Such an ending was unacceptable, so some later editor or scribe added another 12 verses to where Mark had stopped writing. But most early manuscripts end at verse 8. Why such an abrupt ending? We are told not to end sentences with hanging prepositions – a silly, pedantic rule, by the way. But to end an entire book with a hanging preposition? That takes some guts. But Mark did it. Why? Because at the end, the young man is also speaking to us. Go home, go to the place most familiar to you – there you will meet Jesus, in the ordinariness of life.

Every one of us is a continuation of the Gospel story. And every one of us has his or her own story, our own circumstances in which we live out the reality of resurrection. The Gospel is open-ended; it brings each one of us into an encounter with the risen Christ. Remember what he told to Thomas last week? You believe because you see me? Blessed rather are those who have not seen and yet believe. We have not seen, but we know, because we have been touched, and our lives have found meaning and purpose and spiritual strength. We are part of a family that transcends all human borders and boundaries. And we are here to take care of each other and of our home planet until the Lord comes to fill everything with light. Until then, let us be light.

Today is Earth Day. It is a day that reminds us to be stewards of God’s creation, just as the women were faithful to their stewardship in going to the tomb to care for the body of our Lord. There are people who are trying to create doubt about the damage we are doing to our environment and our precious planet and life on it. But logic, science (real science!) AND our Christian faith tell us to put our hearts to the task of caring for God’s creation. Let’s be good stewards of what God has placed in our care, just as the women were good stewards in their commitment to caring for Christ at his burial. And just as they were surprised by the resurrection, so also we might be surprised to find what our small actions can do for the planet!

We do not worship the earth. Have you noticed the psalm verses that we sing during this Paschal season at the First Antiphon of the Liturgy? They are from Psalm 66:

Make a joyful noise to God, all the earth! Sing of His name, give glory to His praise!

Say to God: How awesome are Your deeds!

Let all the earth worship You and praise You! Let it praise Your name, O Most High!