In the Liturgy of Holy Saturday, the Orthodox Church includes 15 readings from the Old Testament – mostly readings that directly or symbolically refer to the Passover, to Resurrection, or to Baptism. These readings are remnants of the original all-night Paschal Vigil which developed in the church during the centuries of its prominence in the Roman Empire. Indeed, the entire baptismal character of this Holy Saturday Liturgy reminds us that the most important day for baptisms in the first millennium of the church was precisely this holiest night of the Paschal Vigil.

In many of today’s Orthodox churches, this original group of 15 readings has been reduced to just three (Genesis 1:1-13; Jonah 1:1-4:11; Daniel 3:1-23 & Song of the Three Youths from the Septuagint). Undoubtedly this is a surrender to the short attention spans of modern churchgoers, but it’s also a recognition that this is no longer the Paschal Vigil. It is a Liturgy on the morning of Holy Saturday, and there remains hardly any baptismal connection – though it is not uncommon for adult baptisms to be scheduled on this morning, as part of the Liturgy. The Greek traditions in particular have reduced this most sacred Liturgy of the year to a mere communion service for the once-a-year crowds. A shocking and inexcusable betrayal of what is best in the Orthodox liturgical tradition.

One of the three readings that still remain is the entire Book of Jonah. Undoubtedly the reason for its inclusion in the Paschal Vigil was the statement that Jesus made to the Pharisees that questioned him: “An evil and adulterous generation seeks for a sign, but no sign shall be given to it except the sign of Jonah” (Matthew 16:4; also Matthew 12:38-39). The church has always taken this statement of Jesus as a prophecy of his death and resurrection. So the hymnography of Easter constantly compares the 3-day burial of Christ to the three days that Jonah spent in the whale; with the resurrection itself prefigured by the emergence of Jonah from the whale.

But is that all there is to the saying of Jesus about “the sign of Jonah”? I doubt it. As so often happened in the Christian tradition, starting with the New Testament itself, proof texts from the Old Testament were used as “prophecies” of Christ, even when violence was done to the original context of the Hebrew writings. No wonder Jews have always been angry at how Christians have used (or misused) their scriptures!

In Luke 11:29-32, Jesus repeats the statements about the men of Nineveh and the queen of the South, but the interpretation he offered here did not include a reference to his burial and resurrection! Instead, he said: When the crowds were increasing, he began to say, “This generation is an evil generation; it seeks a sign, but no sign shall be given to it except the sign of Jonah. For as Jonah became a sign to the men of Nin′eveh, so will the Son of man be to this generation” (Luke 11:29-30).

I believe Luke’s version is closer to what Jesus said and meant. Matthew tended to be more concerned with “fulfillment of prophecies” (even when the “fulfillment” was forced on the original Hebrew texts), but Luke seems to have had less need of this type of use of the Old Testament.

What was the sign that God gave to the people of Nineveh through Jonah? Mercy. Jonah was sent to Nineveh to preach to them and warn them of God’s judgment (Jonah 3). Much to Jonah’s surprise, the people repented! But instead of rejoicing that his message had succeeded, Jonah became angry and despondent.

Chapter 4 of the book of Jonah describes a rather strange dialogue between Jonah and God which I’m not going to try to analyze here. Suffice it to say that the conversation revolves around God’s mercy. Jonah admits so much: “I knew that you are a gracious God and merciful, slow to anger, and abounding in steadfast love, and ready to relent from punishing.” God at the end exposes Jonah’s anger as misplaced and delivers the coup de grâce: “And should I not pity Nineveh, that great city, in which there are more than a hundred and twenty thousand persons who do not know their right hand from their left, and also much cattle?” And that’s how the book of Jonah ends, with God’s concern for cattle! 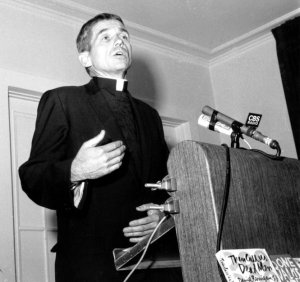 Why am I thinking of Jonah two months after Holy Saturday and Pascha? Because of Father Dan Berrigan. He died this year, at the age of 94, on April 30th, exactly on Holy Saturday in the Orthodox Church. Father Berrigan was a Catholic priest, known especially for his activism against the Vietnam War and social justice. I have been a reader of his many books for several years and I was reading some pages today in his book Minor Prophets, Major Themes. In the chapter on Jonah, I read:

This God, thinks Jonah, how is he to be borne? He changes plans without once consulting with his prophet. A courtesy to be sure, and long due. He bends low, lends ear to humans and their lunatic behavior.

[And what of God?] The last word belongs to Him. It concerns children and animals, which is to say, the future of living things. Whose well being, one concludes, was of small concern to Jonah.

But as to how this last word of God’s tenderness was received, what change it wrought, where it beckoned our hero?

Perhaps more to the point, where it beckons ourselves?

For “a Greater than Jonah is here.”

Today, also, the preachers of gloom and doom proclaim judgment on sinners but don’t expect mercy. Just like Jonah, they relish thoughts of punishment; God’s mercy and tenderness come as a surprise to them.

Mercy, tenderness, concern for the future of life – here is the real message of Jonah. And this is the message of Holy Saturday and Christ’s Resurrection. This is the message every day of the church’s life and on every page of Scripture. “And also much cattle” – all life is sacred to God. We don’t know if Jonah got it in the end. That is why a “greater than Jonah” came: to bring the message home, to plant it in our hearts.

The “sign of Jonah” is simply the coming of Christ to be our advocate, our friend, our companion on the path. He is a sign to us of God’s mercy and forgiveness. For as Jonah was a sign to the Ninevites, so the Son of Man is a sign to us (cf. Luke 11:30).