Here is a marvelous story from today’s news to put a smile on anyone’s face. A Couple Feeds 4,000 Syrian Refugees on their Wedding Day! And I would think that the one who is smiling the most is our Lord Jesus Christ himself. 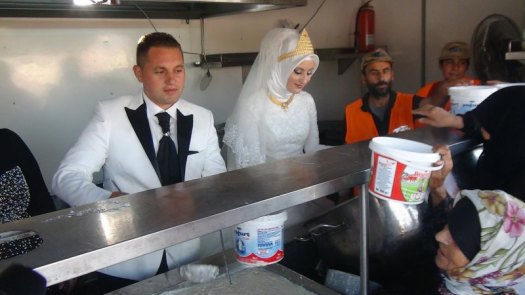 Jesus often used a wedding feast as an image of God’s kingdom. It seems that in his mind the wedding feast or  large banquet was the best description of our home with God: abundant joy and celebration, and open to all. Matthew 22:1-10 and Luke 14:16-24 are the classic versions of the banquet parable. Note how, in both parables, the invitation is ignored by the elite; this opens the way for the general invitation. In Matthew’s version there is a rather negative epilogue which acts as a counterweight to the openness theme. The punch line of this epilogue – “For many are called, but few are chosen” (Matthew 22:14) – has always confused me since the message of the parable is the exact opposite! Did the religious Matthew feel a need to correct the ultra-liberal, and rather unreligious, generosity of the Master? I wouldn’t put it past Matthew. But perhaps there is another way to understand Jesus’ meaning if we just reverse the two halves of that statement: Few indeed are chosen (initially), but then many are called (the open invitation that follows). Perhaps it’s all a matter of how you accent the two statements in this one sentence. Elitism is very common in Christian circles, and certainly the male disciples of Jesus were very obviously afflicted with this tendency. Note John’s desire to stop someone outside their circle (Mark 9:38-41), or the fight between disciples as to who would have the best places in the kingdom (Mark 10:35-37). Jesus was very much aware of this disease of elitism that would afflict all his disciples, throughout the ages. That is why he always went outside the normal boundaries of society and what was ‘acceptable.’ How often did he choose Samaritans as examples of those who please God, rather than his own compatriots who hated the Samaritans (Luke 10:25-37; Luke 17:11-19; John 4:1-42)? And how about his preference for tax collectors and sinners over Pharisees? Or his breaking down of barriers with women and those declared to be ‘unclean’ (Mark 2:15-17; Luke 18:9-14; 15:1-2; 8:1-3; 8:43-48; and countless other places in the Gospels)? Jesus often attended banquets and wedding feasts. Perhaps that is why he was accused of being “a glutton and a drunkard”! (See Matthew 11:18-19 and elsewhere.) John tells us that the first miraculous ‘sign’ that Jesus performed was at a wedding feast. Note also that he was inspired to tell the parable of the great banquet from watching people at a dinner where he also was invited:

When he noticed how the guests chose the places of honor, he told them a parable. “When you are invited by someone to a wedding banquet, do not sit down at the place of honor, in case someone more distinguished than you has been invited by your host; and the host who invited both of you may come and say to you, ‘Give this person your place,’ and then in disgrace you would start to take the lowest place. But when you are invited, go and sit down at the lowest place, so that when your host comes, he may say to you, ‘Friend, move up higher’; then you will be honored in the presence of all who sit at the table with you. For all who exalt themselves will be humbled, and those who humble themselves will be exalted.” He said also to the one who had invited him, “When you give a luncheon or a dinner, do not invite your friends or your brothers or your relatives or rich neighbors, in case they may invite you in return, and you would be repaid. But when you give a banquet, invite the poor, the crippled, the lame, and the blind. And you will be blessed, because they cannot repay you, for you will be repaid at the resurrection of the righteous.” (Luke 14:7-14)

Then comes this in verse 15: One of the dinner guests, on hearing this, said to him, “Blessed is anyone who will eat bread in the kingdom of God!” And this leads immediately to the parable of the banquet I referred to above (Luke 14:16-24).

I like to think that among the 4,000 refugees these blessed newlyweds served on their wedding day was Jesus himself! ‘…. for I was hungry and you gave me food, I was thirsty and you gave me something to drink, I was a stranger and you welcomed me, I was naked and you gave me clothing, I was sick and you took care of me, I was in prison and you visited me…. Truly I tell you, just as you did it to one of the least of these, you did it to me.’ 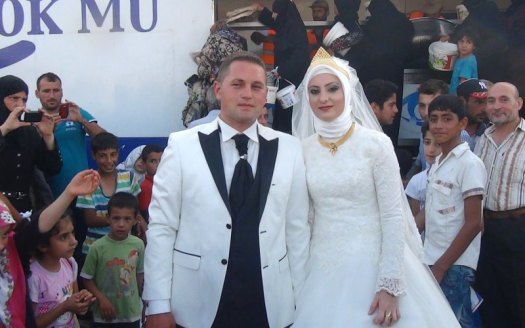