The whole world has risen in Christ … if God is “all in all,” then everything is in fact paradise, because it is filled with the glory and presence of God, and nothing is any more separated from God. THOMAS MERTON

Thomas F. Torrance (1913-2007) was one of the most important Christians of the twentieth century. A Reformed theologian in Scotland, he also practiced a deeply ecumenical understanding of the Christian faith and wrote extensively on the early Church Fathers, but with an honesty and critical insight unmatched by any contemporary Orthodox theologian. I made extensive use of Torrance in writing my dissertation on the Christology of St. Cyril of Alexandria, but I hadn’t touched any of Torrance’s books for thirty years – until recently, when I dug out my old Torrance books and began dipping into them again.

In his collection of essays, Theology in Reconstruction, published in 1965, I chanced upon this passage today:

Now I believe that the real problems which the Church has to face today are not those created by science and the changes in cosmological theory, but in the recrudescence of the old pagan disjunction between God and the world, in which redemption is divorced from creation and the mighty acts of God are removed from actual history… Once this radical dichotomy is posited… the basic affirmation of the Christian Faith, namely that in Jesus Christ we have none other than the Being of God himself in our human existence in space and time, is called in question… What is at stake is in a modern form the same problem that the Church faced when it battled with Gnostics and Arians in the early centuries. The great dividing line is once again the doctrine of the Incarnation, or if you will, the homoousion, i.e. the doctrine that… in Jesus Christ in our flesh and history we have in person the eternal Word of God… (p. 263)

It’s no easy task reading Torrance, and I have edited a whole page here to quote only the parts that are most easily understandable. But his point is very easy to understand. He is saying that when we separate creation from our salvation in Christ, we are reviving the old heresies of Arius and the Gnostics; indeed, we fall into paganism. Arius rejected the idea of Christ being the homoousios Son of God. Gnostics rejected the goodness of creation, and therefore they ended up denying the Incarnation. Orthodox theology affirms that the Son of God became truly and fully human, and in doing so tore down the separation between God and creation. In reconciling us with God, Jesus Christ reconciled all creation.

“The earth is the Lord’s, and all that is within it.” This phrase from Psalm 24 is spoken at the conclusion of every funeral service in the Orthodox Church. “We are from the earth and to earth we return,” the priest intones as he places some earth on the body before closing the casket. The earth is our home – during our waking life and after we depart from this life. The earth is also our eternal home, if the words of Revelation are to be taken literally. Romans 8:21 states very clearly: “the creation itself will be liberated from its bondage to decay and brought into the freedom and glory of the children of God.”

If all this is true, should we Christians not be at the forefront of caring for the earth and celebrating its beauty? I see Earth Day as a day on which I can affirm my belief in the incarnation of the Word of God. “The Word became flesh and dwelt among us” the Gospel of John declares in its majestic opening chapter. καὶ ἐσκήνωσεν ἐν ἡμῖν, the Greek text says: “The Word became flesh and pitched his tent with us.” It’s earthy language, the language of the desert and the sand – not the language of a nice home in the suburbs. Everything about Jesus is earthy, because we are of earth and to earth we return.

Let us take care of our earthy home. Let’s pitch our own tents and walk barefoot and lightly on our beautiful planet. Let us do our own part in protecting this precious gift from God. It is the only home we will ever have. Happy Earth Day! May every day be earth day!

CHRIST IS RISEN! The whole creation is risen with him!! 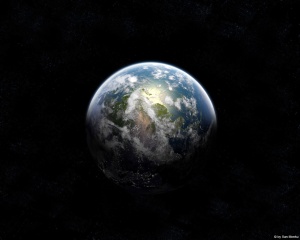