August 29th is observed every year as a commemoration of the beheading of St. John the Baptist. The story is told most fully in Mark 6:14-30.

The story is gruesome, and the composer Richard Strauss took advantage of the gruesome aspects in creating his shocking opera, Salome. The daughter of Herodias is not named in the Gospel narratives, but Salome is the name that tradition has given her. She was coached by her mother to request the head of John the Baptist, which she did. But that’s the stuff that operas and melodramas are based on. The true meaning of this day lies elsewhere.

Why was John put in jail to begin with? Because he accused King Herod for committing incest by marrying his sister-in-law, Herodias. But that too is the stuff of melodrama and there is confusion in the historical records about Philip, Salome and Herodias. No, it’s not melodrama and royal intrigues that interests us today. Rather, it is the ministry of John himself.

John was imprisoned because he spoke truth to power. His conflict with Herod and Herodias echoes the conflict of the prophet Elijah with Ahab and Jezebel in the time of ancient Israel. In the Orthodox Church, John is called Prophet and Forerunner. He was prophet because, like the prophets of ancient Israel, he proclaimed God’s judgment on sin. And he was prophet also in the sense that he spoke of the coming of Christ, the Messiah. But he did more than speak of Christ’s coming. He also prepared the way for the coming; hence he is also called Forerunner (Prodromos in Greek). His appearance in the desert, baptizing people and preparing them to receive the coming of Christ, was a fulfillment of the prophesy spoken by Isaiah 40:2-4, “The voice of him that crieth in the wilderness, Prepare ye the way of the Lord, make straight in the desert a highway for our God,” to quote the King James version that was set to music my Handel in his great oratorio, Messiah. (See and hear the tenor soloist singing these words at about the 10-minute mark of this video of the complete oratorio; or at about the 8-minute mark of this alternative video recording.)

Icons of John the Baptist often show him preaching in the desert with his severed head on display. 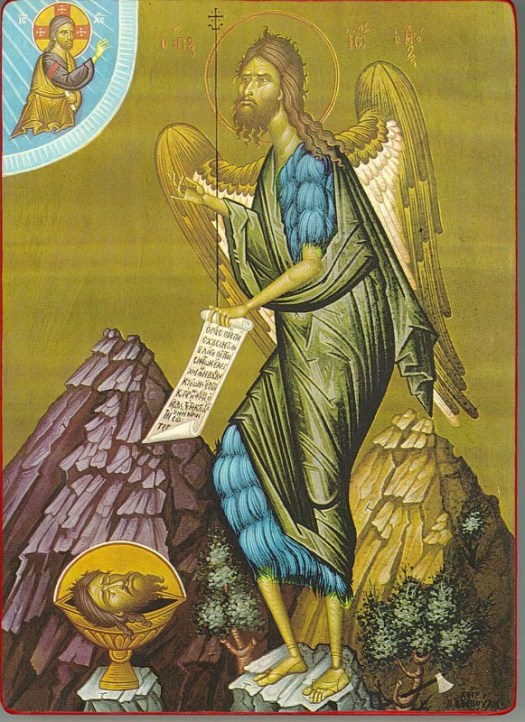 The message of the icon is clear. From the moment John went out in the desert, it was a foregone conclusion that John would die a brutal death. Herod and Herodias were not the only enemies he created. He challenged all levels of society (Luke 3:1-20), especially the powerful. He was the last of the Hebrew prophets. He prepared the way for one mightier than he: “I baptize you with water; but one who is mightier than I is coming; I am not worthy to untie the thong of his sandals. He will baptize you with the Holy Spirit and fire” (Luke 3:16). The powers destroyed John, as they would later destroy the One whose way he prepared. The Forerunner’s spiritual unity with Christ was complete.

The Church honors the beheading of John the Forerunner every year on August 29th. May today be a call to every one of us to go out into the desert places of our lives to hear the voice of one crying in the wilderness, “Prepare the way of the Lord.” Every one of us can prepare the way of the Lord. The desert is in us and all around us. It is the place where God waits to meet us, to heal us, to baptize us with Spirit and fire.