Once upon a time there was a people who looked at what was happening around the world and in their own country and began to be concerned about their own survival. “How can we be sure that we will have enough when the crisis comes? Let’s start collecting food, materials, and knowledge so that we’ll be safe and secure.” So they started hoarding. Sure enough, things began falling apart and other people started to protest: “You have much more than you need, but we don’t have enough to survive. Give us part of what you have saved!” But the hoarders said: “No, no, we need it for ourselves!” But the others cried out, “We are dying, please give us food and materials to survive!”

The hoarders became even more fearful, afraid that the poor and hungry would attack them. So they said to one another: “Let us build walls to protect our provisions. They erected walls so high that they could not even see any more whether there were any people outside the walls or not. But their fear increased and they told each other: “Our enemies have become so numerous that they may try to tear our walls down. We need to put bombs on top of the walls so that nobody will dare to even come close to us.”

But instead of feeling safe and secure behind their armed walls they found themselves trapped in the prison they had built with their own fear. They even became afraid of their own bombs, wondering if they might harm themselves more than their enemies.

Meanwhile, outside their walls, the land became fruitful again, life gradually returned to normal. But the fearful hoarders inside the walls had no idea, as they could not even see what was happening outside their high, bomb-protected walls.

The Dutch Catholic priest, Henri Nouwen, wrote this parable in one of his many books, and I changed the ending in order to make it less suicidal. It’s a good parable for starting our entry into Lent. After all, the Church also chose parables to start our journey to Lent in the previous three Sundays (Publican and Pharisee, Prodigal Son, Sheep and Goats).

Why this parable today? Because too much of what passes for Lenten spiritual advice seems to tell us to shut down and protect our senses, to withdraw, to look inward. I disagree. Lent is a time to break down walls that we build around ourselves. Take a cue from nature. Lent always comes in that part of the year when winter and spring struggle with each other for dominance. By the time Lent ends and ushers in Holy Week, spring will have gained the upper hand. It’s the time of spiritual struggle, as the darkness and light inside every one of us struggle for dominance.

I’m not ready for Lent. I don’t want to fast, I don’t want extra church services. I’m not ready. The darkness inside me doesn’t want to yield to fasting or extra worship. Perhaps you can relate. And yet yield I must – and at the end of six weeks I will be grateful for the growing light inside me just as outside in the natural world.

Lent is not a time to build walls to protect our spirits. Let monks and fear mongers build walls. Lent is a bridge, not a time for walls. It’s a bridge to the light of Easter. 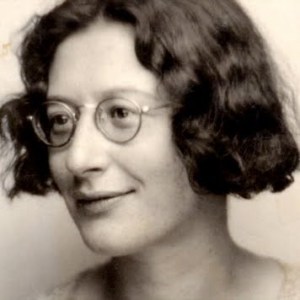 Simone Weil was a remarkable woman who lived only 34 years in the early part of the 20th century. Albert Camus called her “the only great spirit of our time.” T. S. Eliot said, “We must simply expose ourselves to the personality of a woman of genius, of a kind of genius akin to that of the saints.” “Simone Weil is a mystery that should keep us all humble,” said Flannery O’Connor about her – and Flannery herself was something of a mystery!

She was a Jewish Frenchwoman who was drawn to Jesus Christ and the Christian faith but refused to be baptized for reasons that I don’t need to explain. The other great passion in her intellectual life was the civilization of Ancient Greece. Her notebooks are full of direct quotes from Plato, Aeschylus, Sophocles, Euripides, Homer…all in the original Classical Greek. She wrote one of the most penetrating essays on Homer’s Iliad.

She loved the Greek word μεταξύ. There are pages of her notebooks filled with several uses of this word. She even used it in discussing Buddhist and Hindu concepts, even mathematics! This single word became almost a shorthand for some of her most important spiritual insights. “Need for μεταξύ in order to prevent us from seizing hold of nothingness instead of full being.” It helped her understand ‘The breadth and depth of the love of Christ.’

“The bridges of the Greeks. We have inherited them but we do not know how to use them. We thought they were intended to have houses built upon them. We have erected skyscrapers on them to which we ceaselessly add stories. We no longer know that they are bridges, things made so that we may pass along them, and that by passing along them we go toward God.”

This quote comes from her book, Gravity and Grace. I think it’s perfect for my message today. Lent is one of the bridges connecting us, guiding us to God. And yet how much we have covered this bridge with buildings of our own making which keep us bound, closed in, walled in. We have covered this bridge with legalistic, pharisaic rules that keep our spirits bound rather than uplifted. Are we like those hoarders after all, afraid to let go of any of our attachments? Afraid even to question the legalistic stuff that do nothing except make pharisees of many of us?

“True earthly goods are μεταξύ. We can only respect those of others if we regard those we possess ourselves only as μεταξύ —which implies that one is on the way towards the point where one will be able to do without them.”

There is so much Simone Weil’s favorite word can teach us. So much Lent can do in our lives. Let it be a time of spiritual openness; not a time of closed, walled-in spirit.